Two of the nation’s most eminent neuroscientists also count a happy marriage and brilliant children among their successes. Etan Smallman hears about their latest collaboration – a graphic novel on grey matter 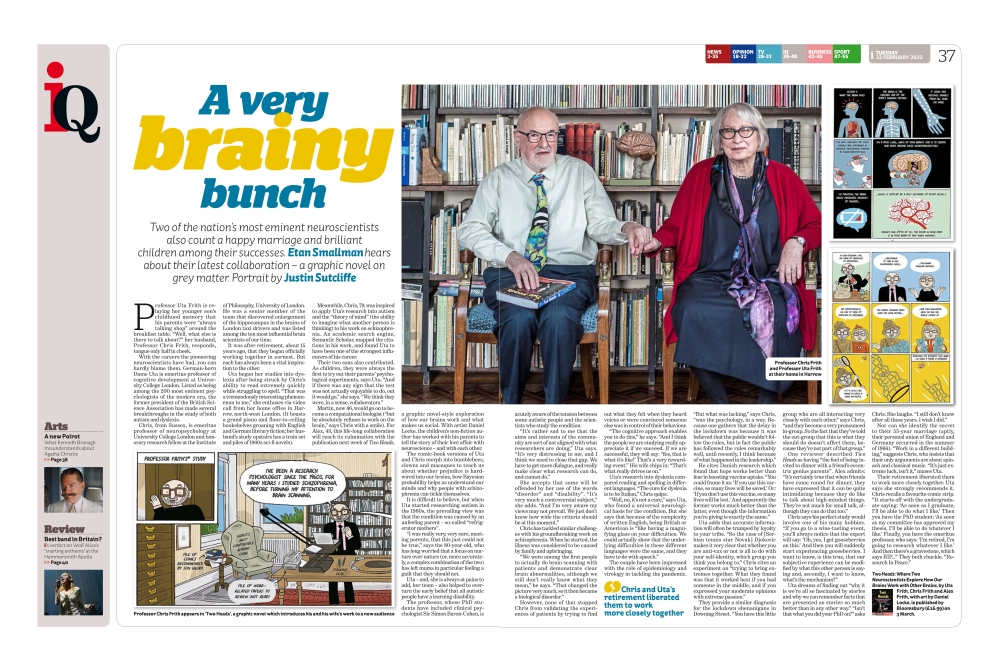 Professor Uta Frith is relaying her younger son’s childhood memory that his parents were “always talking shop” around the breakfast table. “Well, what else is there to talk about?” her husband, Professor Chris Frith, responds, tongue only half in cheek.

With the careers the pioneering neuroscientists have had, you can hardly blame them. German-born Dame Uta is emeritus professor of cognitive development at University College London. Listed as being among the 200 most eminent psychologists of the modern era, the former president of the British Science Association has made several breakthroughs in the study of both autism and dyslexia.

Chris, from Sussex, is emeritus professor of neuropsychology at University College London and honorary research fellow at the Institute of Philosophy, University of London. He was a senior member of the team that discovered enlargement of the hippocampus in the brains of London taxi drivers and was listed among the ten most influential brain scientists of our time.

It was after retirement, about 15 years ago, that they began officially working together in earnest. But each has always been a vital inspiration to the other.

Uta began her studies into dyslexia after being struck by Chris’s ability to read extremely quickly while struggling to spell. “That was a tremendously interesting phenomenon to me,” she enthuses via video call from her home office in Harrow, north-west London. (It boasts a grand piano and floor-to-ceiling bookshelves groaning with English and German literary fiction; her husband’s study upstairs has a train set and piles of 1960s sci-fi novels).

Meanwhile, Chris, 79, was inspired to apply Uta’s research into autism and the “theory of mind” (the ability to imagine what another person is thinking) to his work on schizophrenia. An academic search engine, Semantic Scholar, mapped the citations in his work, and found Uta to have been one of the strongest influencers of his career.

Their two sons also contributed. As children, they were always the first to try out their parents’ psychological experiments, says Uta. “And if there was any sign that the test was not actually enjoyable to do, out it would go,” she says. “We think they were, in a sense, collaborators.”

Martin, now 46, would go on to become a computational biologist (“but he absolutely refuses to work on the brain,” says Chris with a smile). For Alex, 43, this life-long collaboration will reach its culmination with the publication next week of Two Heads, a graphic novel-style exploration of how our brains work and what makes us social. With artist Daniel Locke, the children’s non-fiction author has worked with his parents to tell the story of their love affair with neuroscience – and with each other.

The comic-book versions of Uta and Chris morph into bumblebees, clowns and macaques to teach us about whether prejudice is hardwired into our brains, how Bayesian probability helps us understand our minds and why people with schizophrenia can tickle themselves.

It is difficult to believe, but when Uta started researching autism in the 1960s, the prevailing view was that the condition was caused by an unfeeling parent – so-called “refrigerator mothers”.

“I was really very, very sure, meeting parents, that this just could not be true,” says the 80-year-old, who has long worried that a focus on nurture over nature (or, more accurately, a complex combination of the two) has left mums in particular feeling a guilt that they should not.

Uta – and, she is always at pains to add, her team – also helped to overturn the early belief that all autistic people have a learning disability.

The professor, whose PhD students have included clinical psychologist Sir Simon Baron-Cohen, is acutely aware of the tension between some autistic people and the scientists who study the condition .

“It’s rather sad to me that the aims and interests of the community are sort of not aligned with what researchers are doing,” Uta says. “It’s very distressing to me, and I think we need to close that gap. We have to get more dialogue, and really make clear what research can do, and cannot do.”

She accepts that some will be offended by her use of the words “disorder” and “disability”. “It’s very much a controversial subject,” she adds. “And I’m very aware my views may not prevail. We just don’t know how wide the criteria should be at this moment.”

Chris has tackled similar challenges with his groundbreaking work on schizophrenia. When he started, the illness was considered to be caused by family and upbringing.

“We were among the first people to actually do brain scanning with patients and demonstrate clear brain abnormalities, although we still don’t really know what they mean,” he says. “That changed the picture very much, so it then became a biological disorder.”

However, none of that stopped Chris from validating the experiences of patients by trying to find out what they felt when they heard voices or were convinced someone else was in control of their behaviour.

“The cognitive approach enables you to do this,” he says. “And I think the people we are studying really appreciate it if we succeed. If we are successful, they will say: ‘Yes, that is what it’s like!’ That’s A very rewarding event.” His wife chips in: “That’s what really drives us on.”

Uta’s research into dyslexia compared reading and spelling in different languages. “The cure for dyslexia is to be Italian,” Chris quips.

“Well, no, it’s not a cure,” says Uta, who found a universal neurological basis for the condition. But she says that because of the complexity of written English, being British or American is “like having a magnifying glass on your difficulties. We could actually show that the underlying difficulties in these different languages were the same, and they have to do with speech.”

The couple have been impressed with the role of epidemiology and virology in tackling the pandemic.

“But what was lacking,” says Chris, “was the psychology, in a way. Because one gathers that the delay in the lockdown was because it was believed that the public wouldn’t follow the rules, but in fact the public has followed the rules remarkably well, until recently, I think because of what happened in the leadership.”

Uta adds that accurate information will often be trumped by loyalty to your tribe. “So the case of [Serbian tennis star Novak] Djokovic makes it very clear that whether you are anti-vax or not is all to do with your self-identity, which group you think you belong to.” Chris cites an experiment on “trying to bring extremes together. What they found was that it worked best if you had someone in the middle, and if you expressed your moderate opinions with extreme passion.”

They provide a similar diagnosis for the lockdown shenanigans in Downing Street. “You have this little group who are all interacting very closely with each other,” says Chris, “and they become A very pronounced in-group. So the fact that they’ve told the out-group that this is what they should do doesn’t affect them, because they’re not part of that group.”

One Reviewer described Two Heads as having “the feel of being invited to dinner with a friend’s eccentric genius parents”. Alex admits: “It’s certainly true that when friends have come round for dinner, they have expressed that it can be quite intimidating because they do like to talk about high-minded things. They’re not much for small talk, although they can do that too.”

Chris says his perfect study would involve one of his many hobbies. “If you go to a wine-tasting event, you’ll always notice that the expert will say: ‘Oh, yes, I get gooseberries on this.’ And then you will suddenly start experiencing gooseberries. I want to know, is this true, that our subjective experience can be modified by what this other person is saying and, secondly, I want to know, what’s the mechanism?”

Uta dreams of finding out “why it is we’re all so fascinated by stories and why we can remember facts that are presented as stories so much better than in any other way.” “Isn’t that what you did your PhD on?” asks

Chris. She laughs. “I still don’t know after all these years. I wish I did.”

Nor can she identify the secret to their 55-year marriage (aptly, their personal union of England and Germany occurred in the summer of 1966). “Work in a different building,” suggests Chris, who insists that their only arguments are about spinach and classical music. “It’s just extreme luck, isn’t it,” muses Uta.

Their retirement liberated them to work more closely together. Uta says she strongly recommends it. Chris recalls a favourite comic strip. “It starts off with the undergraduate saying: ‘As soon as I graduate, I’ll be able to do what I like.’ Then you have the PhD student: ‘As soon as my committee has approved my thesis, I’ll be able to do whatever I like.’ Finally, you have the emeritus professor, who says: ‘I’m retired, I’m going to research whatever I like.’ And then there’s a gravestone, which says RIP” They both chuckle. “Research In Peace.”