Despite losing a leg after being bitten, Paige Winter still admires the animals and is campaigning for better conservation efforts 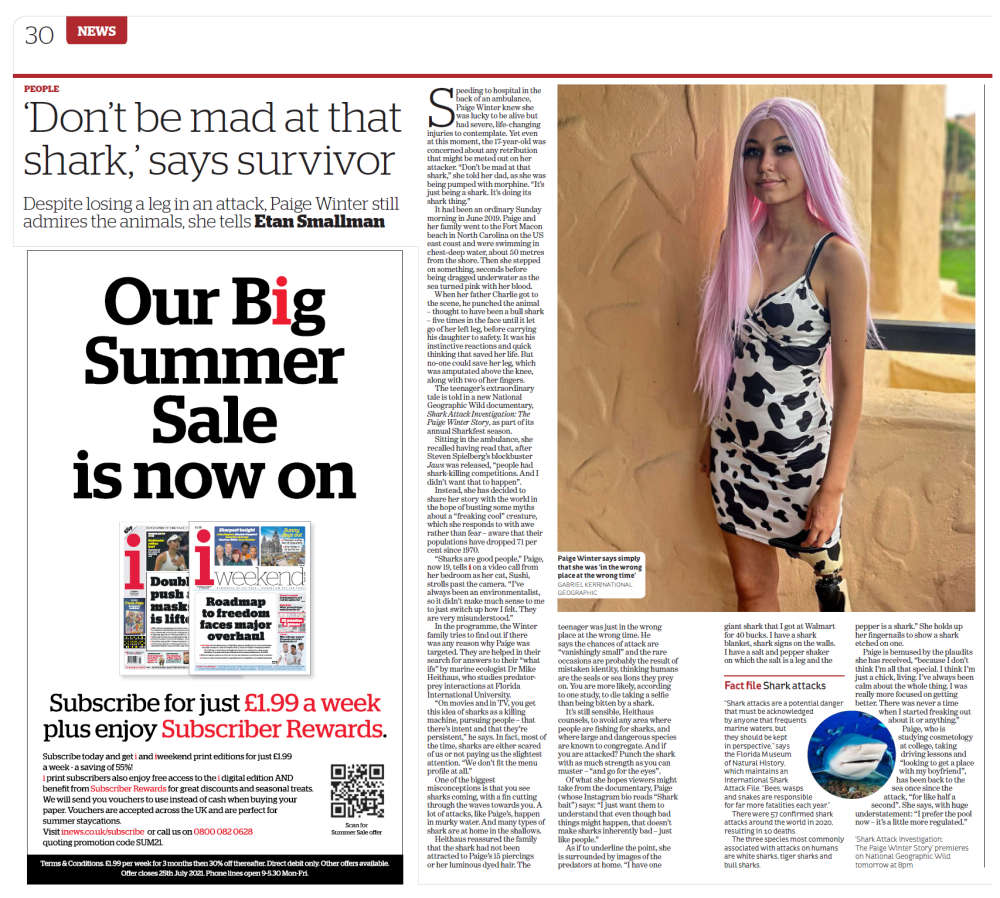 Speeding to hospital in the back of an ambulance, Paige Winter knew she was lucky to be alive but had severe, life-changing injuries to contemplate. Yet even at this moment, the 17-year-old was concerned about any retribution that might be meted out to her attacker. “Don’t be mad at that shark,” she told her dad, as she was being pumped with morphine. “It’s just being a shark. It’s doing its shark thing.”

It had been an ordinary Sunday morning in June 2019. Paige and her family went to the Fort Macon beach in North Carolina on the US east coast and were swimming in chest-deep water, about 50 metres from the shore. Then she stepped on something, seconds before being dragged underwater as the sea turned pink with her blood.

When her father Charlie got to the scene, he punched the animal – thought to have been a bull shark – five times in the face until it let go of her left leg, before carrying his daughter to safety. It was his instinctive reactions and quick thinking that saved her life. But no-one could save her leg, which was amputated above the knee, along with two of her fingers.

Sitting in the ambulance, she recalled having read that, after Steven Spielberg’s blockbuster Jaws was released, “people had shark-killing competitions. And I didn’t want that to happen”.

Instead, she has decided to share her story with the world in the hope of busting some myths about a “freaking cool” creature, which she responds to with awe rather than fear – aware that their populations have dropped 71 per cent since 1970.

“Sharks are good people,” Paige, now 19, tells i on a video call from her bedroom as her cat, Sushi, strolls past the camera. “I’ve always been an environmentalist, so it didn’t make much sense to me to just switch up how I felt. They are very misunderstood.”

In the programme, the Winter family tries to find out if there was any reason why Paige was targeted. They are helped in their search for answers to their “what ifs” by marine ecologist Dr Mike Heithaus, who studies predatorprey interactions at Florida International University.

“On movies and in TV, you get this idea of sharks as a killing machine, pursuing people – that there’s intent and that they’re persistent,” he says. In fact, most of the time, sharks are either scared of us or not paying us the slightest attention. “We don’t fit the menu profile at all.”

One of the biggest misconceptions is that you see sharks coming, with a fin cutting through the waves towards you. A lot of attacks, like Paige’s, happen in murky water. And many types of shark are at home in the shallows.

Heithaus reassured the family that the shark had not been attracted to Paige’s 15 piercings or her luminous dyed hair. The teenager was just in the wrong place at the wrong time. He says the chances of attack are “vanishingly small” and the rare occasions are probably the result of mistaken identity, thinking humans are the seals or sea lions they prey on. You are more likely, according to one study, to die taking a selfie than being bitten by a shark.

It’s still sensible, Heithaus counsels, to avoid any area where people are fishing for sharks, and where large and dangerous species are known to congregate. And if you are attacked? Punch the shark with as much strength as you can muster – “and go for the eyes”.

Of what she hopes viewers might take from the documentary, Paige (whose Instagram bio reads “Shark bait”) says: “I just want them to understand that even though bad things might happen, that doesn’t make sharks inherently bad – just like people.”

As if to underline the point, she is surrounded by images of the predators at home. “I have one giant shark that I got at Walmart for 40 bucks. I have a shark blanket, shark signs on the walls. I have a salt and pepper shaker on which the salt is a leg and the pepper is a shark.” She holds up her fingernails to show a shark etched on one.

Paige is bemused by the plaudits she has received, “because I don’t think I’m all that special. I think I’m just a chick, living. I’ve always been calm about the whole thing. I was really more focused on getting better. There was never a time when I started freaking out about it or anything.”

Paige, who is studying cosmetology at college, taking driving lessons and “looking to get a place with my boyfriend”, has been back to the sea once since the attack, “for like half a second”. She says, with huge understatement: “I prefer the pool now – it’s a little more regulated.”