The UK’s opposition to the death penalty has come under question over the case of alleged Isis terrorists, but many other Brits have already been told they will be executed, reports Etan Smallman 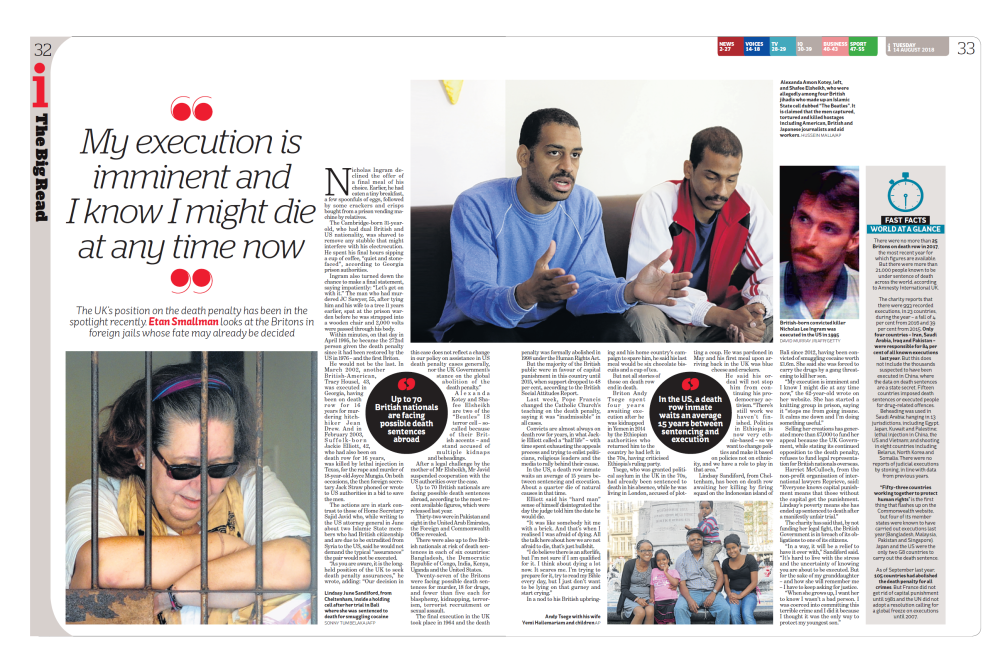 Nicholas Ingram declined the offer of a final meal of his choice. Earlier, he had eaten a tiny breakfast, a few spoonfuls of eggs, followed by some crackers and crisps bought from a prison vending machine by relatives.

The Cambridge-born 31-yearold, who had dual British and US nationality, was shaved to remove any stubble that might interfere with his electrocution. He spent his final hours sipping a cup of coffee, “quiet and stonefaced”, according to Georgia prison authorities.

Ingram also turned down the chance to make a final statement, saying impatiently: “Let’s get on with it.” The man who had murdered JC Sawyer, 55, after tying him and his wife to a tree 11 years earlier, spat at the prison warden before he was strapped into a wooden chair and 2,000 volts were passed through his body.

Within minutes, on that day in April 1995, he became the 272nd person given the death penalty since it had been restored by the US in 1976 – and the first Briton.

He would not be the last. In March 2002, another British-American, Tracy Housel, 43, was executed in Georgia, having been on death row for 16 years for murdering hitchhiker Jean Drew. And in February 2003, Suffolk-born Jackie Elliott, 42, Up British are possible who had also been on death row for 16 years, was killed by lethal injection in Texas, for the rape and murder of 18-year-old Joyce Mungia. On both occasions, the then foreign secretary Jack Straw phoned or wrote to US authorities in a bid to save the men.

The actions are in stark contrast to those of Home Secretary Sajid Javid who, while writing to the US attorney general in June about two Islamic State members who had British citizenship and are due to be extradited from Syria to the US, said he would not demand the typical “assurances” the pair would not be executed.

“As you are aware, it is the longheld position of the UK to seek death penalty assurances,” he wrote, adding: “Our decision in this case does not reflect a change in our policy on assistance in US death penalty cases generally, nor the UK Government’s stance on the global abolition of the death penalty.”

Alexanda Kotey and Shafee Elsheikh are two of the “Beatles” IS terror cell – socalled because of their British accents – and stand accused of multiple kidnaps and beheadings.After a legal challenge by the mother of Mr Elsheikh, Mr Javid suspended cooperation with the US authorities over the case.

Up to 70 British nationals are facing possible death sentences abroad, according to the most recent available figures, which were released last year.

Thirty-two were in Pakistan and eight in the United Arab Emirates, the Foreign and Commonwealth Office revealed.

There were also up to five British nationals at risk of death sentences in each of six countries: Bangladesh, the Democratic Republic of Congo, India, Kenya, Uganda and the United States.

Twenty-seven of the Britons were facing possible death sentences for murder, 18 for drugs, and fewer than five each for blasphemy, kidnapping, terrorism, terrorist recruitment or sexual assault.

The final execution in the UK took place in 1964 and the death penalty was formally abolished in 1998 under the Human Rights Act.

But the majority of the British public were in favour of capital punishment in this country until 2015, when support dropped to 48 per cent, according to the British Social Attitudes Report.

Last week, Pope Francis changed the Catholic Church’s teaching on the death penalty, saying it was “inadmissible” in all cases.

Convicts are almost always on death row for years, in what Jackie Elliott called a “half life” – with time spent exhausting the appeals process and trying to enlist politicians, religious leaders and the media to rally behind their cause.

In the US, a death row inmate waits an average of 15 years between sentencing and execution. About a quarter die of natural causes in that time.

Elliott said his “hard man” sense of himself disintegrated the day the judge told him the date he would die.

“It was like somebody hit me with a brick. And that’s when I realised I was afraid of dying. All the talk here about how we are not afraid to die, that’s just bullshit.

“I do believe there is an afterlife, but I’m not sure if I am qualified for it. I think about dying a lot now. It scares me. I’m trying to prepare for it, try to read my Bible every day, but I just don’t want to be lying on that gurney and start crying.”

In a nod to his British upbring-ing and his home country’s campaign to spare him, he said his last meal would be six chocolate biscuits and a cup of tea.

But not all stories of those on death row end in death.

In the US, row waits an 15 years sentencing Briton Andy Tsege spent four years awaiting execution after he was kidnapped in Yemen in 2014 by the Ethiopian authorities who returned him to the country he had left in the 70s, having criticised Ethiopia’s ruling party.

Tsege, who was granted political asylum in the UK in the 70s, had already been sentenced to death in his absence, while he was living in London, accused of plotting a coup. He was pardoned in May and his first meal upon arriving back in the UK was blue cheese and crackers.

He said his ordeal will not stop him from continuing his prodemocracy activism. “There’s still work we haven’t fin-ished. Politics in Ethiopia is now very ethnic-based – so we want to change politics and make it based on policies not on ethnicity, and we have a role to play in that area.”

Lindsay Sandiford, from Cheltenham, has been on death row awaiting her killing by firing squad on the Indonesian island of Bali since 2012, having been convicted of smuggling cocaine worth £1.6m. She said she was forced to carry the drugs by a gang threatening to kill her son.

“My execution is imminent and I know I might die at any time now,” the 62-year-old wrote on her website. She has started a knitting group in prison, saying it “stops me from going insane. It calms me down and I’m doing something useful.”

Selling her creations has generated more than £7,000 to fund her appeal because the UK Government, while stating its continued opposition to the death penalty, refuses to fund legal representation for British nationals overseas. Harriet McCulloch, from the non-profit organisation of international lawyers Reprieve, said: “Everyone knows capital punishment means that those without the capital get the punishment. Lindsay’s poverty means she has ended up sentenced to death after a manifestly unfair trial.”

The charity has said that, by not funding her legal fight, the British Government is in breach of its obligations to one of its citizens. “In a way, it will be a relief to have it over with,” Sandiford said. “It’s hard to live with the stress and the uncertainty of knowing you are about to be executed. But for the sake of my granddaughter – and how she will remember me – I have to keep asking for justice.

“When she grows up, I want her to know I wasn’t a bad person. I was coerced into committing this terrible crime and I did it because I thought it was the only way to protect my youngest son.”

FAST FACTS WORLD AT A GLANCE

There were no more than 25 Britons on death row in 2017, the most recent year for which figures are available.

But there were more than 21,000 people known to be under sentence of death across the world, according to Amnesty International UK.

The charity reports that there were 993 recorded executions, in 23 countries, during the year – a fall of 4 per cent from 2016 and 39 per cent from 2015. Only four countries – Iran, Saudi Arabia, Iraq and Pakistan – were responsible for 84 per cent of all known executions last year. But this does not include the thousands suspected to have been executed in China, where the data on death sentences are a state secret. Fifteen countries imposed death sentences or executed people for drug-related offences.

Beheading was used in Saudi Arabia; hanging in 13 jurisdictions, including Egypt, Japan, Kuwait and Palestine; lethal injection in China, the US and Vietnam; and shooting in eight countries including Belarus, North Korea and Somalia. There were no reports of judicial executions by stoning, in line with data from previous years.

“Fifty-three countries working together to protect human rights” is the first thing that flashes up on the Commonwealth website, but four of its member states were known to have carried out executions last year (Bangladesh, Malaysia, Pakistan and Singapore). Japan and the US were the only two G8 countries to carry out the death sentence.

As of September last year, 105 countries had abolished the death penalty for all crimes. But France did not get rid of capital punishment until 1981 and the UN did not adopt a resolution calling for a global freeze on executions until 2007.

on m Up to 70 British nationals are facing possible death sentences abroad of in He s him h in now want and In the US, a death row inmate waits an average 15 years between sentencing and execution